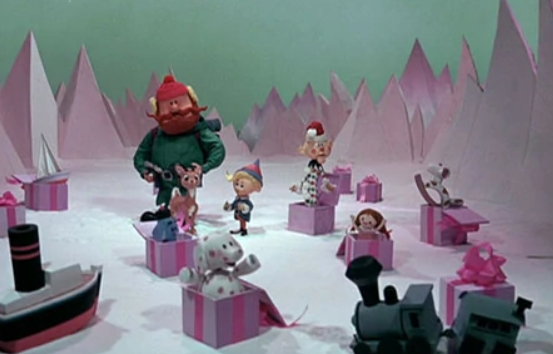 Growing up, the most popular TV Special during the Christmas season was Rudolph the Red Nosed Reindeer. This production aired in 1964 and has been a rerun every December since. The one hour claymation production had so many memorable characters including Rudolph himself, the Abominable Snow Monster and Yukon Cornelius.

As Rudolph and his friends made their journey, they were chased onto an ice sheet and set adrift to parts unknown. They came upon a secluded kingdom called The Island of Misfit Toys. This place was ruled by Moonracer, a benevolent flying lion who was King of this land.

This group of characters is a collection of toys that just do not fit in because of their unique quirks or design flaws. When the visitors arrive, these toys break out into a song sharing their unique attributes that make them different. They tell how much they would look forward to Christmas day if only Santa could find them a good home. It is fun with a hint of sadness, but it does nothing but endear them to the viewer.

Each day, this caring leader flies around the world looking to find more unloved toys and brings them back to his island. He makes an exception to allow Rudolph and his group to stay within his realm even though they are not toys themselves. He asks only in return that they talk with Santa some day and let him know about his citizens.

Charlie in the Box

This lovable character is the official sentry and takes on the role of main spokesman for the inhabitants. He greets the group and introduces himself and the others. His quirky difference is that he was named Charlie instead of Jack. Which leads him to state my favorite line of the entire show. “No child wants to play with a Charlie in the box.” Which for me is untrue, because I had wanted one for years.

For a character who got more face time than a lot of the other toys, it is not exactly apparent why “a Dolly for Sue” was deemed a misfit. While years later the creators were asked this question, I am not certain the answers weren’t thought of later to suit the interviewers questions and I do not wish to dispel the magic of this character by addressing some of the responses that I have read.

During the song, we are introduced to a nameless cowboy whose only fault is that he rides an ostrich instead of a horse. While I see no problem with this, it was an obvious deviation from the norm that landed him here.

I never fully understood why the spots were such a problem for a stuffed animal, but there he was among the others. Perhaps standards are different now than they were in 1964.

Choo Choo Train With Square Wheels On The Caboose

Here we have a definite design flaw. I try not to judge, but I do hope Santa Claus brought him back to the Elves to provide him with a full set of round wheels. This would definitely be an issue for a kid. But as an adult, I think I would prefer to keep him just as he is. Maybe these toys really are more for the enjoyment of adults, rather than children, who appreciate the imperfections.

Try as I might, I have watched the scenes repeatedly and searched everywhere online and cannot find any issues with this scooter. No matter, this toy is an inhabitant of this land and even included in the song, and so deserves a place of prominence here.

A Water Pistol That Shoots Jelly

Seems like a simple fix, but so be it. This squirt gun should be able to squirt water but for whatever reason does not. If I have to justify these choices, it would take the fun out of it all.

Possibly the most adorable of them. The choice of making tail feathers instead of wings definitely produces an unusual effect, but that is part of the mystique here.

Bird That Doesn’t Fly, But Instead Swims

This seems to be a living pet, but we are unsure. All we do know is that it definitely has a fin. So whether it is a toy or natural phenomenon, it definitely belongs here.

“The Most Wonderful Day Of The Year”
Song Lyrics

A jack-in-the-box waits
for children to shout
“Wake up! Don’t you know
it’s time to come out?”

Toys galore,
Scattered on the floor
There’s no room for more
And it’s all because of Santa Claus.

A scooter for Jimmy
A dolly for Sue
The kind that will even say,
“How do you do?”